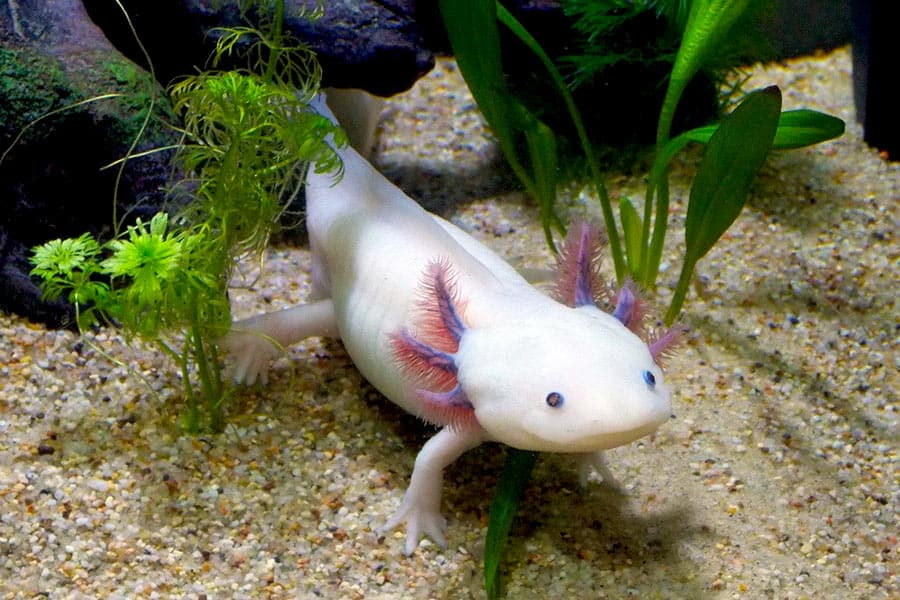 While a water-bound animal might not seem like the most fun kind of pet, the aquatic axolotl has become wildly popular pet in recent years. While it may be confined to a tank, it has a big personality and is easy to love. A relatively low-maintenance critter, axolotls are generally considered suitable for beginner pet owners.

However, their desirability also has a lot to do with their charm: feathery gills, ever-smiling faces, and morphs that range from cotton candy pink to vibrant gold. These “walking fish” are the epitome of cool. (They were the inspiration behind the design of Toothless from How to Train Your Dragon, as well as Mudkip and Whooper from the popular Pokémon videogame series.)

Although they are called “walking fish,” they are actually a type of salamander – albeit a very unique salamander. They have a condition called “neoteny” which causes them to retain larval features even as adults, hence why they have a tadpole-like dorsal fin and feathered gills. But that’s not all that makes them special!

They are able to regenerate their limbs, organs, and even parts of their brain. Additionally, in comparison to mammals, they are extremely resistant to cancer, making them of great value to scientists working in the medical field. In fact, axolotls are bred so widely for labs “they are basically the white mice of amphibians.”

While they may be thriving in captivity, their wild brothers and sisters are on the brink of extinction. Their only natural habitat is in the canals of Xochimilco, a district in Mexico City. There, the axolotl population has dropped from 6,000 axolotls per square kilometer in 1998, to 35 amphibians per square kilometer in 2017. The alarming rate of decline is due to both predators and pollution.

Despite its large captive numbers, the loss of the wild axolotl is still of grave concern because “after centuries of inbreeding, captive populations are vulnerable to disease. And the loss of genetic diversity in wild axolotls—owing to their diminishing population—means that scientists lose out on learning all they can about the animal’s biology.”

Because their biology may possess life-saving information for humans, the renewal of its wild population is an especially urgent priority. The axolotl is yet another example of how our lives are inextricably linked with the world around us – when one of us begins to fail, so does the other. Indeed, biologist Luis Zambrano, who is working to save the wild axolotl, said, “It’s not about just rescuing the axolotl, it’s about rescuing the whole system of Xochimilco.”

According to Aztec legend, the first axolotl was actually a god who had changed form to evade being sacrificed. So, it seems survival has always been an uphill battle for the “water dog!” Luckily, Dr. Zambrano and his team are helping preserve this amazing and adorable animal.

Dr. Zambrano is promoting traditional methods of agriculture among the locals, with organic alternatives to pesticides and fertilizer – for example, ground up tilapia, which just happens to be the invasive fish preying on the axolotl. The cooperation of the local farmers has been, and will continue to be, an integral part of the rescue process.

Additionally, Zambrano has been creating small, tilapia-free axolotl sanctuaries by blocking off sections of certain canals. Zambrano’s team is hoping to acquire around half of the Xochimilco canals, thereby increasing protected axolotl habitat.

The axolotl itself is a conservation paradox – plentiful in pet stores, yet marked as critically endangered. The key to its survival is public support and education. The next time you see one of these smiling salamanders in a local store, be sure to stop and admire it. After all, conservation truly begins with an appreciation for the wonders of the world around us.

Schipani, Sam, “How to Save the Paradoxical Axolotl,” Smithsonian Magazine, January 8, 2018, https://www.smithsonianmag.com/science-nature/saving-paradoxical-axolotl-180967734/.

“What is an Axolotl and Why Are They Endangered?” Bluereef Aquarium, October 30, 2020, https://www.bluereefaquarium.co.uk/portsmouth/blog/education/what-is-an-axolotl-and-why-are-they-endangered/.