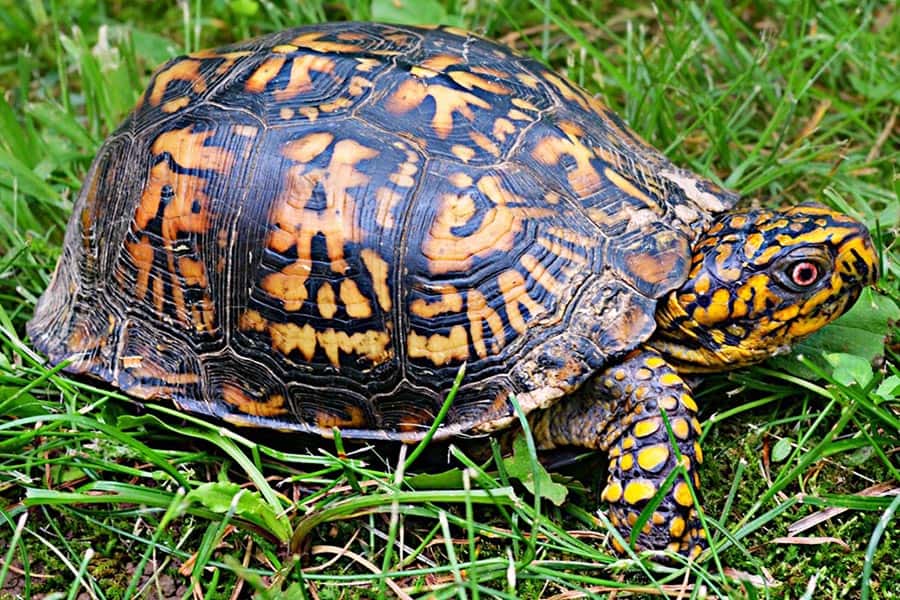 Box turtles, a common sight along the highways of North America.

Their habit stretches all the way from the Midwest to the East Coast, reaching as far South as Florida and as far North as Maine. Box turtles subspecies vary from region to region, including the ornate box turtle with its stunning yellow-striped shell and the three-toed box turtle who has three toes on its back feet.

While no box turtles are yet classified as endangered on a national level, some species have been marked as endangered by their state, and all subspecies are in danger due to loss of habitat, infectious disease, being taken from the wild for the pet trade, and traffic incidents. 1

As box turtles’ numbers began to dangerously dwindle, a study was done by James Gibbs, conservation biologist at State University of New York in Syracuse, to see what impact road-kill had in the decrease. Gibbs sadly concluded, “in many regions more than 5% of these turtles are likely to die while crossing roads, which is more than the populations can sustain.” 2 Gibbs also added that in certain regions the estimate is even higher, climbing to a 10, or even 20%, mortality rate.3

Although box turtles’ armor-like shells shield them from most predators, they are no match for automobiles. Turtles are often pitted against cars and trucks as they wander in search of food, mates, or a place to nest. Warmed by the sun, it’s also easy for turtles to mistake the blacktop as a perfect basking place. 4

Gibbs suggests the installation of buffer zones, building road crossings, and encouraging land-use planners to integrate large areas of roadlessness for habit sustainability. 5 These big but necessary changes would help fight turtle mortality rates and ensure their survival for generations to come.

However, the survival of the box turtle isn’t only in the hands of big land developers—you can help, too!

The next time you see a turtle on the street, please consider helping him cross the road! Here’s a few easy steps to follow:

1) Make sure it is safe to move the turtle.
Your safety is the most important thing on this list. Please do NOT stop to move a turtle if it will endanger you or other drivers on the road. Signal in advance if you’re going to pull over, and watch for oncoming traffic as you cross the road.

2) Pick the box turtle up using both hands, holding it by the sides and base of the shell.
Box turtles are usually docile, but this position will keep you from getting nipped if they are angry or pinched if they close up their shell. It also provides a firm grip, minimizing the risk of the turtle being dropped.

3) Cross the road in the direction the turtle was going.
It’s likely the turtle is seeking out a mate or a place to nest!

4) Do NOT relocate the turtle.
Although you might have a better place in mind (probably one with less traffic!) the turtle’s survival depends upon staying in their territory. Box turtles are intrinsically connected to the area they hatched in, and usually stay in the area for their entire lives. Being removed from their home causes the turtle stress and can shorten their lifespan.

5) Do NOT take the turtle home.
This is a hard one! These scaly friends are so cute, it’s truly tempting to bring them home. But if you’re in the market for a pet turtle, please research thoroughly and find one that has been captive bred by a reputable breeder.

Please be safe, and thank you for making a difference by helping box turtles on the road!

Image by Ally White from Pixabay