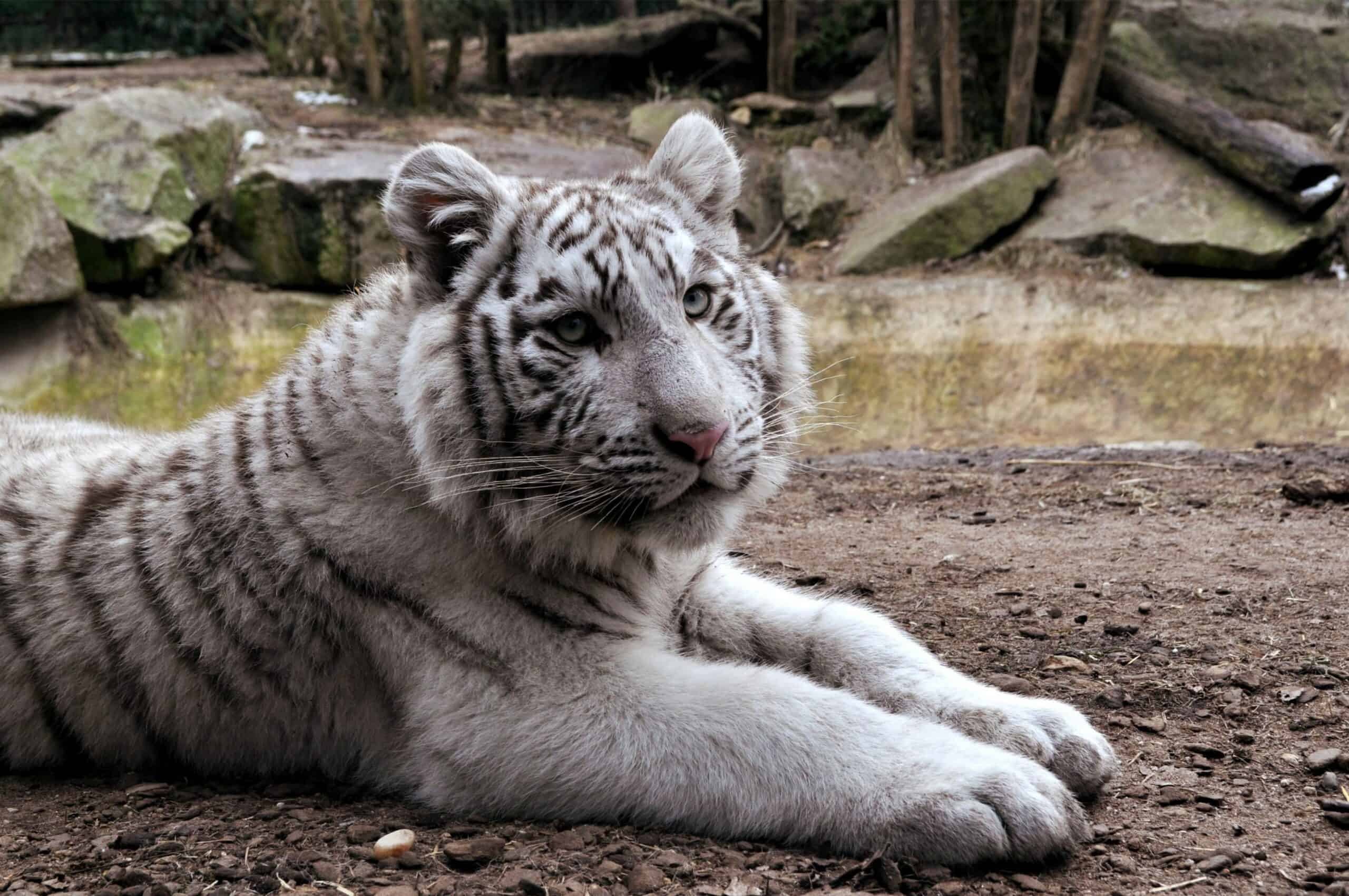 Unlike the wild and captive orange and black striped tigers, white tigers are characterized by their white and black coats as well as their bright, blue eyes. As pets and in zoos, these tigers are highly sought for their unique and striking beauty. Because of their popularity, white tigers have been mistreated.

Despite many beliefs, the white tiger is not a species of tiger by itself. White tigers are Bengal tigers, the most common tiger in the world. However, like many other animals, mixtures of gene traits can create anomalies like the white coat instead of orange and the blue eyes instead of brown.

White tigers were originally spotted in the wild, but they were eventually captured and put into zoos and in captivity.

When a desired trait, like blue eyes and a white coat, appears, tiger traders, and in some cases, zoos will use only those tigers to breed. Since the chances of producing a white tiger is higher if the parents are both white tigers, there have been many cases of inbreeding white tigers in captivity. In fact, it is believed that all white tigers are inbred.

This selective breeding will produce a white tiger, but it can also produce health problems such as immune deficiencies, mental issues, cleft palates, and other developmental issues.

Because of these health issues, many organizations, such as the Association of Zoos & Aquariums in the United States, have banned the breeding of white tigers.

Though the breeding of these tigers is highly discouraged, many believe that using the profits from tourism would be able to help orange tigers in the wild. Despite this idea of mistreating white tigers for profit, the world population of tigers has been steadily declining. Many experts say that breeding white tigers will do nothing to save their wild cousins, and studies show this is true.

Photo by Lucie Jung on Unsplash

The Project consists of unique digital tiger products which keep tigers front and center in the digital realm while generating funds to protect them in the wild. Digital tiger products are paired with the website, which is home to up-to-date information on tigers, latest tiger news, and the specific conservation actions urgently needed to stop each sub-species from disappearing into extinction.

Stop deforestation and save the tiger habitat. Check your labels. Palm oil is found in many everyday products and most of it is made unsustainably, responsible for driving the ongoing loss of habitat home to tigers and other threatened species. If a product does contain palm oil, be sure to look for the RSPO Sustainable palm oil seal.

Take action on climate. You can also personally help tigers by taking action on climate change and reducing your carbon footprint. By saving energy, flying less, using public transportation, eating local, and consuming less red meat, you are helping to give tigers a better chance of survival (and many other species as well).

Visit tigers only at AZA Accredited Zoos. Do not visit tiger petting facilities. Too often these places are involved in the trade of tiger body parts. And before heading to a Zoo check before you visit. Make sure that the Zoo is contributing to the Tiger Species Survival Plans and supporting tiger conservation in the wild.

Support tiger conservation organizations on the ground that are protecting tigers. The best chance for tigers is to protect them in the wild and their forest habitats. By supporting Project Endangered tigers, you are helping global tiger conservation efforts .

Additionally, you can purchase our awesome and unique feature rich Save Tigers Live Wallpaper App and Tigers HD Windows Screensaver bundle. They include cutting edge features that will bring your screens alive! Both for one low price, proceeds benefit tiger conservation.
Ad, malware, and spyware free!