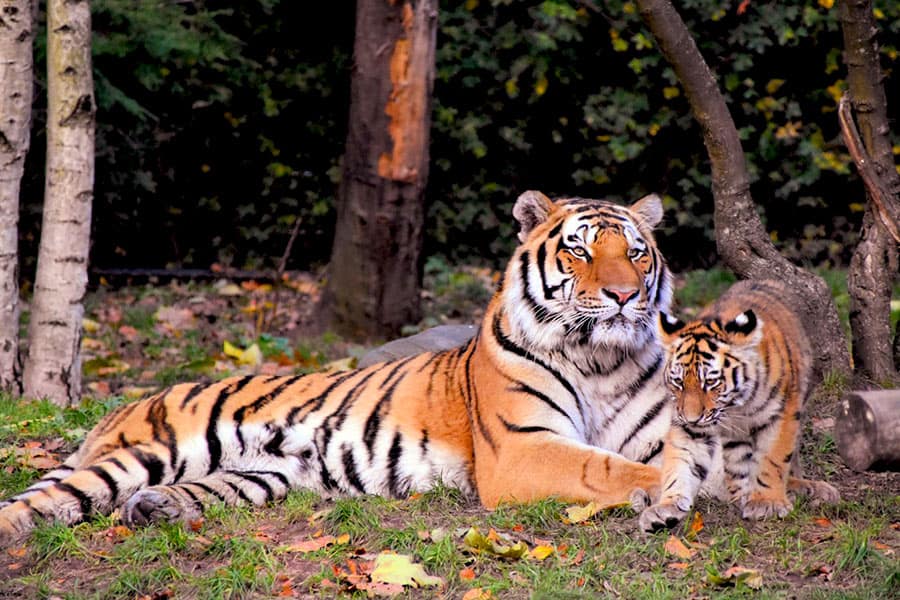 Conservation of Endangered Tigers in 2021 is a top priority

Over a century ago, it is estimated that there were around 100,000 tigers living in the wild. In present day, approximations show that less than 4,000 tigers exist in the wild while around 8,000 live in captivity. Even though tigers were added to the Endangered Species of Wild Fauna and Flora in July of 1975, the tiger population has been steadily decreasing well into 2020. If we are to keep the species from extinction, it will take a worldwide commitment!

Tigers are characterized by their orange and white coats that are covered in black stripes. It is said no two tigers have the same striped pattern, and the striped pattern goes down to their skin, not just their fur.

While there are 9 types of tiger subspecies, with 3 extinct, all tigers have the same characteristic colors except the rare white Bengal tigers and the Siberian tigers (Amur tiger), which have brown stripes instead of black.

In addition, these animals are the biggest cats in the world, with Siberian tiger males being able to weigh almost 700 pounds and being nearly eleven feet long from whiskers to the tip of their tails. The smallest subspecies, the Sumatran tiger, can weigh up to half the size of Siberian tigers.

Though their numbers are small, tiger natural habitats range from Bangladesh and Vietnam to Russia and India, and they are present in a total of 13 countries. In captivity, they can be found all over the world.

In the wild, tigers are solitary and typically hunt alone. Their diet mainly consists of mammals, such as deer, antelope, and wild boars, which are found in the dense forests and grasslands where tigers live. They can be opportunistic hunters as well and will feed on bears, birds, and sometimes elephants.

Their wide variety of meals also makes them integral parts of the ecosystems in which they live.

In addition to being aggressive hunters, tigers are also known for their impressive ability to swim great distances and will often lounge in streams and rivers on a hot day.

Endangered tigers face the same risks that made their cousins go extinct. Hunting and poaching as well as loss of habitat and prey due to human encroachment continue to affect the wild populations of tigers.

According to the Wildlife Conservation Society, there are many efforts being put into conserving wild tiger populations. The key goal for sanctuaries and preserves is to protect tigers and their habitats from poachers and human encroachment. Designating land preserves specifically for endangered species can help reduce the chances of poaching and help prevent human/tiger conflicts.

In addition to these tiger conservation protections, the WCS plans to promote policies that are tiger friendly, conduct research on conservation strategies, and monitor wild tiger populations and threats. With these strategies, it’s possible to prevent further extinction of these beautiful creatures but conservation of endangered tigers will need a worldwide effort as many of the subspecies are listed as critically endangered.

The Project consists of unique digital tiger products which keep tigers front and center in the digital realm while generating funds to protect them in the wild. Digital tiger products are paired with the website, which is home to up-to-date information on tigers, latest tiger news, and the specific conservation actions urgently needed to stop each sub-species from disappearing into extinction.

Stop deforestation and save the tiger habitat. Check your labels. Palm oil is found in many everyday products and most of it is made unsustainably, responsible for driving the ongoing loss of habitat home to tigers and other threatened species. If a product does contain palm oil, be sure to look for the RSPO Sustainable palm oil seal.

Take action on climate. You can also personally help tigers by taking action on climate change and reducing your carbon footprint. By saving energy, flying less, using public transportation, eating local, and consuming less red meat, you are helping to give tigers a better chance of survival (and many other species as well).

Visit tigers only at AZA Accredited Zoos. Do not visit tiger petting facilities. Too often these places are involved in the trade of tiger body parts. And before heading to a Zoo check before you visit. Make sure that the Zoo is contributing to the Tiger Species Survival Plans and supporting tiger conservation in the wild.

Support tiger conservation organizations on the ground that are protecting tigers. The best chance for tigers is to protect them in the wild and their forest habitats. By supporting Project Endangered tigers, you are helping global tiger conservation efforts .

Additionally, you can purchase our awesome and unique feature rich Save Tigers Live Wallpaper App and Tigers HD Windows Screensaver bundle. They include cutting edge features that will bring your screens alive! Both for one low price, proceeds benefit tiger conservation.
Ad, malware, and spyware free!