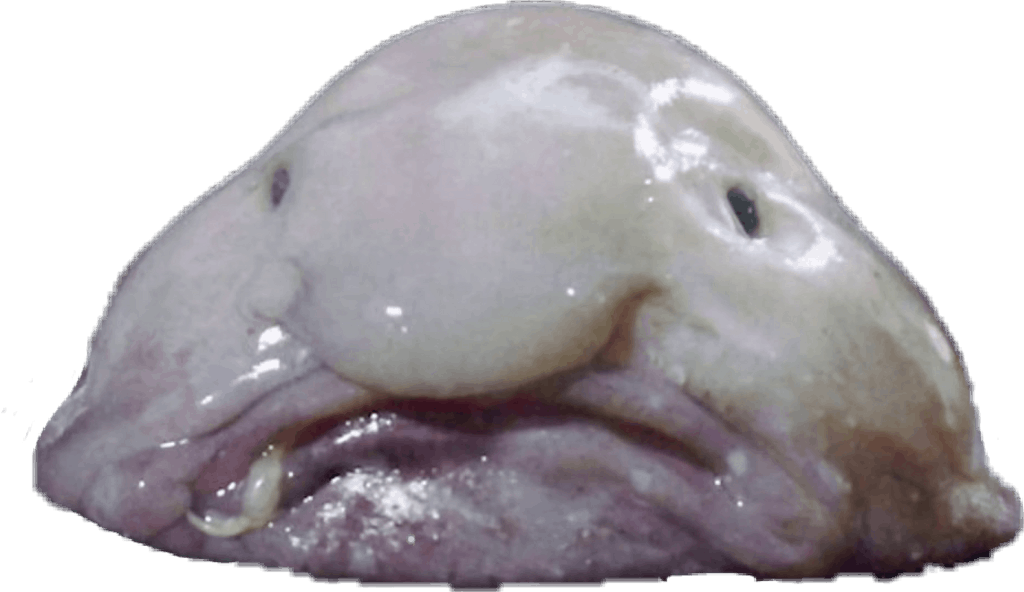 When it comes to meme-culture, mugs, t-shirts, and plushies, the blobfish has given Grumpy Cat some real competition. (Rest in peace, Tardar Sauce.)
But did you know this squidgy fish is also a conservation hero?

Of course, the term “blobfish” actually encapsulates several different species of fish, but most folks use the name to refer to Psychrolutes microporos, which is everyone’s favorite frowny friend. This particular blobfish is relatively new to us and was first discovered by a research vessel off the coast of New Zealand in 1983. The most famous blobfish, whose photo is the one you see floating around the internet, is Mr. Blobby. He was dredged up on another scientific expedition in 2003 and now resides in a jar of formaldehyde at the Australian Museum.

The habitat of the blobfish lies 2,000 to 4,000 feet beneath the ocean surface around southeastern Australia and Tasmania. That means these blobby buddies are constantly under extremely intense water pressure – more than enough to squish us humans! Despite the pressure, the blobfish lives in a relatively stress-free fashion, just floating along the ocean floor and eating whatever happens to pass by. (Usually mollusks and crabs.) Without a skeleton, swim bladder, or significant muscle, there really isn’t much more blobfish can do.

Campaign to help save other endangered animals.

In 2013, the bubblegum pink blobfish was awarded the grand title of “World’s Ugliest Animal” and became the new mascot for the Ugly Animal Preservation Society. While this might sound like a cruel joke, it was actually an incredible win for worldwide conservation efforts. Their popularity erupted, and it became a champion for less-than-attractive animals who still need attention in the field of conservation. Roly-poly pandas and sweet-faced sea turtles were finally forced to share the spotlight with creatures like the mangy looking Aye Aye and ridiculously snooty Proboscis monkey.

Biologist Simon Watt, president of the Ugly Animal Preservation Society, explained that the aesthetic misfits of conservation often make up an incredibly important part of the ecological web; to neglect them is both sad and ultimately self-destructive. For example, Watt shared how “repulsive” naked mole rats “are pain resistant and unable to get cancer,” which means “cancer research for humans has edged forward, and the mole rat no longer looks quite so ugly.”

Although blobfish has become the face of forgotten animals, its own conservation status is actually a matter of debate. Marine scientist Callum Roberts admits we know very little of the deep sea where the blobfish lives, but he fears “we could be destroying it.” Until the deep sea can be explored more thoroughly, we can’t say for certain whether blobfish is really endangered.

Nevertheless, it is unsettling to note the number of blobfish being found in the nets of commercial deep-sea trawlers has steadily increased, reflecting the current overfishing crisis. Overfishing is a problem that has plagued oceanic ecosystems for years, taking away too many fish and altering the speed at which they can reproduce. This creates an imbalance in the food web, and with a ripple effect, begins to threaten the existence of more and more marine species.

Overfishing even poses a direct threat for humans. Millions of people rely on fish for their livelihood and as source of food, so, when overfishing causes fish to disappear, jobs, sustenance, and stable coastal economies are also being lost. However, the demand for seafood only continues to rise, fanning the flames of this circular problem.

However, through memes and plush toys, blobfish has generated awareness and genuine concern for animals that have been forgotten and for problems that have been too long pushed aside. With his gelatinous but gregarious personality, blobfish is reaching people who, until now, had no interest in conservation. That’s what we’d call a step in the right direction!

And luckily, Mr. Blobby doesn’t mind a few laughs at his expense – he’s just happy to help. That’s what makes him a true conservation hero.

Schultz, Colin, “In Defense of the Blobfish: Why the ‘World’s Ugliest Animal’ isn’t as Ugly as You Think It Is,” Smithsonian Magazine, September 13, 2013, https://www.smithsonianmag.com/smart-news/in-defense-of-the-blobfish-why-the-worlds-ugliest-animal-isnt-as-ugly-as-you-think-it-is-6676336/.