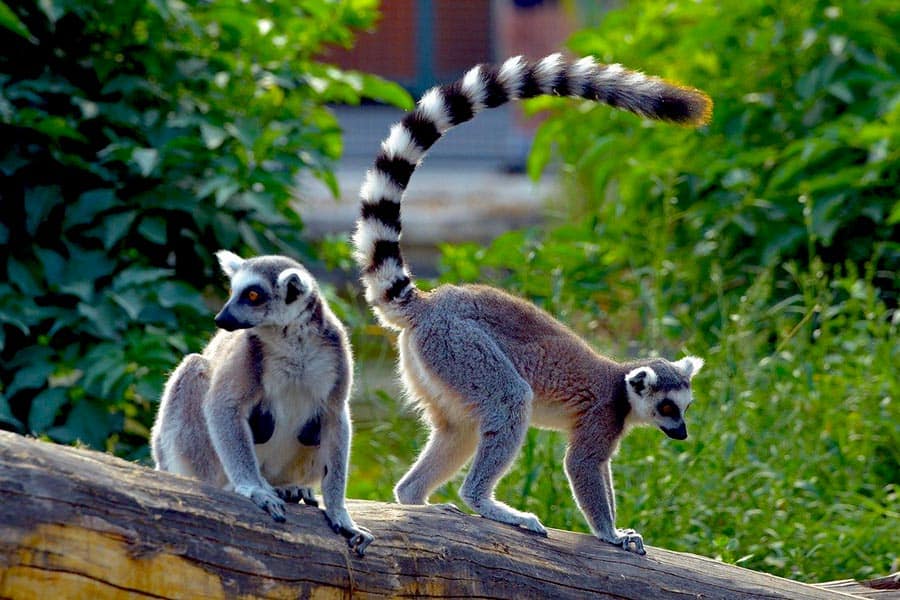 The ring-tailed lemur is one of Madagascar’s most loveable primates.

With their big, yellow eyes and plushy, grey fur, these lemurs are often compared to housecats. They even purr and meow! Weighing around 6 pounds, they’re about the size of a cat, too. However, their most distinctive features resemble those of a raccoon: their ringed tails are adorned with 13 alternating bands of black and white, and their faces are white with black rimmed eyes and dark noses. 7

These lemurs live in arid, open areas or the tropical, dry forests of Madagascar. They spend most of their mornings soaking up sun, sitting in a yoga position where the rays can warm their underbellies, then set out to forage for leaves, flowers, and insects the rest of the day. As the ring-tails travel in troops across their 15-to-57-acre territory, they keep their tails held high, like flags, so no one gets lost. Unlike other lemurs, they travel on all fours across the forest floor. 8

These ring-tailed troops can range from 3 to 30 lemurs, and are matriarchal in social structure. Females lead the troops and tend to stay with their birth group, in an extended family, while males generally migrate out of the troop upon reaching sexual maturity. 9

As mentioned, ring-tailed lemurs can communicate through purrs (mainly as infants) and call to each other with meows. Other sounds in their vocal arsenal include howls, grunts, and barks. They also express themselves by making faces, including the “pout face” in which they form an ‘O’ with their mouths to make a contact call or signify begging. 10 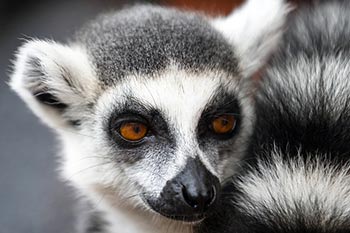 However, the ring-tailed lemurs’ most important and complex communication happens through scent. Using the scent glands on their wrists and shoulders, male lemurs consistently mark their foraging routes, deterring rival troops from encroaching on their territory. Male lemurs even have a spur on each wrist they can use to pierce the bark of a tree before marking it. 11

Scent is also used in ring-tailed throwdowns called “stink fights.” The males will rub their wrists along their fluffy tails, then thrust their tails into each other’s faces to assert dominance. The fight goes on until someone backs down. Stink fights are usually short lived, but the stand-off can last up to an hour or more. 12

In addition to stink fighting, there is also stink flirting. During mating season, males will use their scent to advertise their availability and superiority to other candidates. Females also use their musk to mark branches, advertise fertility, and announce a pregnancy. If a lemur’s scent changes dramatically, it can indicate illness or social stress. 13

Dangers faced by the ring-tailed lemurs in the wild include the Fossa, Harrier Hawk, and humans. The Fossa, a mammal closely related to the mongoose, is the lemurs’ main natural predator. The Fossa is an opportunistic hunter, meaning lemur casualties increase when other food sources run low. The Harrier Hawk attacks from above, tragically taking baby lemurs right from the backs of their mothers. Despite these harrowing predators, humans still pose the biggest problem for ring-tails. 14

In addition to being trapped for the pet trade or killed for food by the local people, the greatest danger for ring-tailed lemurs is habitat loss. The forests are shrinking at an alarming rate, quickly being converted into farmland or being burned to create charcoal. The ring-tailed lemur is an endangered species, sadly creeping ever closer to that critically endangered status. Fortunately, steps are being taken to protect this precious lemur, including the foundation of protected areas like Beza Mahafaly Special Reserve and Berenty Private Reserve.

With protected areas and responsible captive breeding of the ring-tailed lemur, conservationists hope to keep this amazing creature around for future generations.

Image by Onkel Ramirez from Pixabay

Image by suguscat from Pixabay